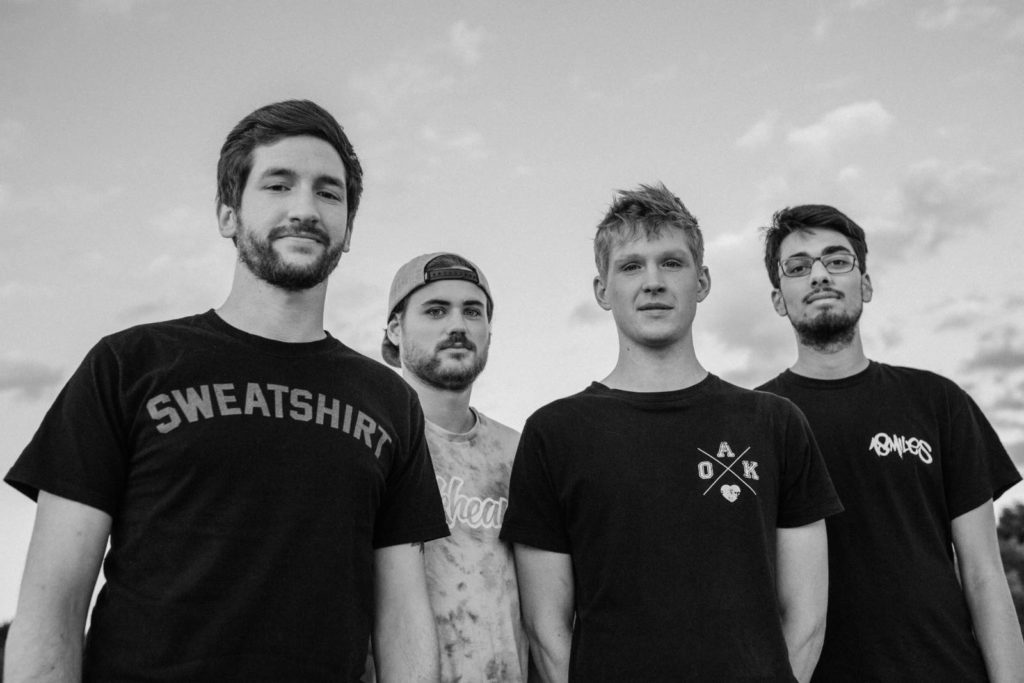 Disorientation and anger are feelings that can be paralysing but a driving power as well. The members of RETURNER form Düsseldorf, Germany had been in search of the right direction on this path, too. They’re living up to the demand to continuously try new things and challenge themselves. The songs on their new EP “I Once Cared”, produced by Daan Nieboer of 18 MILES in Amsterdam, are shaped by mistrust, insecurity and as a result of this, the dangerously unsafe feeling of lethargy.

After releasing their debut EP in summer 2016 and their live studio record “Tuesday Sessions” – both recorded and released by the band themselves – RETURNER started working on new material. In June 2017 they released their song “It Ends With Me”, before parting ways with guitar player Boris Smolorz, which forced the band to take a short break and reinvent themselves.
In spring 2019 RETURNER finally recorded their newest EP “I Once Cared” at Cornerstone Audio in the area of Amsterdam in the Netherlands.

The songs on “I Once Cared” are shaped by the turbulent times of the last two years, as the band had to overcome several obstacles: “Every band member had to deal with a lot of private and professional stuff, which bogged down the whole process of songwriting and recording. When Boris left the band, we kind of had to start from scratch”, explains singer Maik Krause. The band not only lost one of their guitar players, but also their rehearsal room, which included their own record studio, where they produced their first EP, among other things.

Instead of looking for a replacement, RETURNER started writing new songs and decided to go on as a quartet with Kilian Kemna being the only guitarist. “In the meantime, Kilian already had a lot of new ideas and after listening to these tunes, we agreed, that this would be a musical direction we would like to head”, states Krause. The three songs of “I Once Cared” we recorded in spring 2019 by Daan Nieboer at Cornerstone Audio. Nieboer and his old band 18 Miles played some shows with RETURNER before, so the guys already knew each other. “We all are huge fans of 18 Miles and as we played a concert with them in Kleve, he told us, he would be interested in working with us. When we finally had to look for the right person to record our new material, we didn’t hesitate to ask him.”

The songs on “I Once Cared” deal with distrust, insecurity and a way of lethargy:
“For You” speak of the constant fear, that even the best things might come to an end. “Lost Inside My Head” is about the realization of having lost control and having become a threat for oneself and the environment, while „Making Memories“ addresses the feeling of being stuck in a certain stage of life without knowing how to make a change.

This website uses cookies to improve your experience while you navigate through the website. Out of these, the cookies that are categorized as necessary are stored on your browser as they are essential for the working of basic functionalities of the website. We also use third-party cookies that help us analyze and understand how you use this website. These cookies will be stored in your browser only with your consent. You also have the option to opt-out of these cookies. But opting out of some of these cookies may affect your browsing experience.
Necessary immer aktiv
Necessary cookies are absolutely essential for the website to function properly. These cookies ensure basic functionalities and security features of the website, anonymously.
Functional
Functional cookies help to perform certain functionalities like sharing the content of the website on social media platforms, collect feedbacks, and other third-party features.
Performance
Performance cookies are used to understand and analyze the key performance indexes of the website which helps in delivering a better user experience for the visitors.
Analytics
Analytical cookies are used to understand how visitors interact with the website. These cookies help provide information on metrics the number of visitors, bounce rate, traffic source, etc.
Advertisement
Advertisement cookies are used to provide visitors with relevant ads and marketing campaigns. These cookies track visitors across websites and collect information to provide customized ads.
Others
Other uncategorized cookies are those that are being analyzed and have not been classified into a category as yet.
SPEICHERN & AKZEPTIEREN